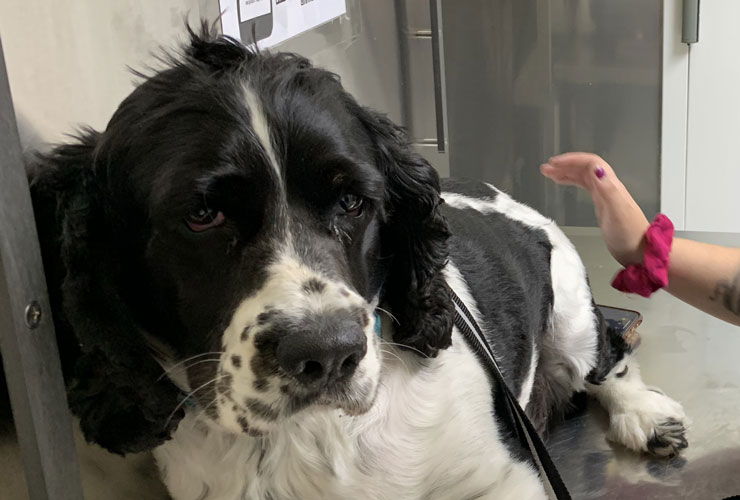 What is canine flu?
Canine influenza is a newly identified respiratory illness of dogs. It is caused by a virus which is closely related to the horse flu virus. Because canine flu is an emerging disease, dogs have no natural immunity to it.

Nearly all dogs exposed to the flu virus will get infected, but not all will have clinical (that is, visible) signs of the flu. Therefore, even dogs without clinical signs can pass the virus to others because they may be infected with it.

Why haven't I heard about canine flu before now?
Canine flu is new. Initial cases of respiratory disease outbreaks were reported at U.S. greyhound racetracks in 2004. It took many months for the researchers to isolate, identify, and characterize the virus and to prove that the virus was the cause of the respiratory illness in the greyhounds. In early 2005, the disease was identified in pet dogs in Florida. Cases have now been found in several states.

How can my dog get canine flu?
The virus spreads most easily where a number of dogs are kept in close proximity, such as boarding kennels, doggie day care, and dog parks, but it can also be passed dog to dog "on the street." The virus is present in respiratory secretions of infected animals--that is, secretions from the nose.

How would I know if my dog has the flu?
Dogs with flu have a fever, runny nose, and a cough. Unfortunately, these symptoms are very similar to those of a well-known disease called "kennel cough." However, kennel cough is a bacterial infection for which there is an effective vaccine. They are alike in that both the flu and kennel cough can progress to pneumonia, and both must be treated by a veterinarian. Since the flu looks like kennel cough, you cannot assume these symptoms are signs of kennel cough. If your dog displays evidence of a fever, runny nose or cough, call your veterinarian immediately.

Can my dog die from this disease?
Most dogs make a full recovery from the flu within a few weeks, but there have been some cases reported in which the flu has progressed to pneumonia. There have also been a few fatalities reported as a result of this virus. Because this is a new disease, veterinary medicine does not yet have adequate information to predict the outcome in all dogs. Therefore, we cannot stress enough the importance of getting veterinary care at the first sign of respiratory disease, as early care does seem related to recovery.

Is there a blood test for the flu?
Although a blood test has been developed to determine if a dog has been exposed to the canine flu virus, it is not available for rapid diagnosis. Knowledge of exposure to the virus will not change how a sick dog is treated, since there is no antiviral drug available to shorten duration of the illness.

Can humans get flu from their dogs?
The equine flu virus has been around for more than 40 years ago, and there has not been any documented transmission of this disease to humans. Since the dog flu virus is so closely related to the equine virus, CDC researchers do not expect transmission to humans.

Can my cat get flu from my dog?
There has been limited testing of cats exposed to dogs with flu. No cats have developed this illness.

Is the canine flu related to the bird flu we hear so much about?
This virus has been identified and scientifically named H3N8. It is a different virus from the one that causes bird flu.

Is there a dog flu "season"?
Since this is an emerging disease, we don't know all of the answers, including whether there is a "flu season" for dogs.

Is there a vaccine for canine flu?
A vaccine is not currently available against canine flu. There is a vaccine against kennel cough which we recommend for all dogs who have even minimal contact with other dogs, but that vaccine will not immunize your dog against canine flu. There is no cure for canine flu. but there are some antibiotic medications that some dogs may benefit from taking for secondary infections as a result of the flu, as well as IV fluids in extreme cases. Discuss these with your veterinarian if your dog becomes sick.

What should I do?
Because of the ease of transmission, we recommend that you keep your pets away from dogs with cold-like symptoms, and do not allow them to share toys, food, or water bowls with other dogs. Owners should keep any potentially sick dogs away from other dogs and public situations.

On December 21, IDEXX Laboratories confirmed 2009 H1N1 influenza virus in a dog in Bedford Hills, New York. A 13-year old dog became ill after its owner was ill with confirmed 2009 H1N1 influenza. The dog was lethargic, coughing, not eating, and had a fever. Radiographs (x-rays) showed evidence of pneumonia. The dog was treated with intravenous fluids, antibiotics, nebulization and other supportive care, and was discharged from the hospital after 48 hours of care. It is currently recovering. Tests submitted to IDEXX Laboratories were negative for canine influenza (H3N8) but positive for 2009 H1N1 influenza. The results were confirmed by the Iowa State Laboratory.

At this time, the messages to clients remain largely the same.

- A cat in Iowa has tested positive for the 2009 H1N1 influenza virus, state officials confirmed this morning, marking the first time a cat has been diagnosed with this strain of influenza.

The cat, which has recovered, is believed to have caught the virus from someone in the household who was sick with H1N1. There are no indications that the cat passed the virus on to any other animals or people.

Prior to this diagnosis, the 2009 H1N1 influenza virus had been found in humans, pigs, birds and ferrets.

The American Veterinary Medical Association (AVMA) and the American Association of Feline Practitioners (AAFP) are reminding pet owners that some viruses can pass between people and animals, so this was not an altogether unexpected event. Pet owners should monitor their pets' health very closely, no matter what type of animal, and visit a veterinarian if there are any signs of illness.